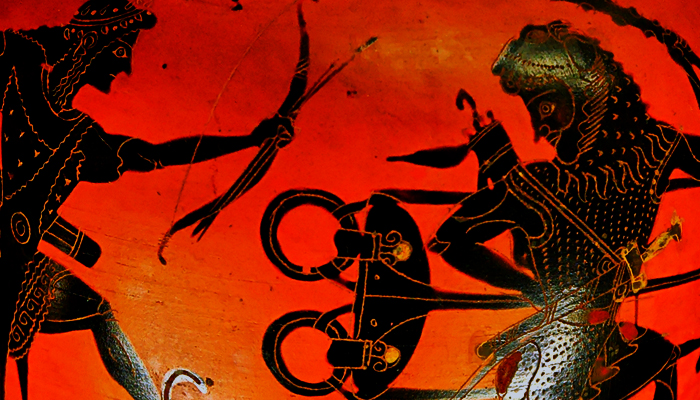 Superheroes, for the most part, are the epitome of all that is modern, cutting-edge, and innovative. Just think Tony Stark’s ridiculous hologram technology in Marvel’s The Avengers movies or Batman’s ability to use other peoples’ cell-phones to create “bat vision,” a techy twist on echolocation, in The Dark Knight.

Because futuristic technology (even tech based mostly in science fiction) is so prevalent in most superhero movies, comics, and TV shows, it’s easy to make the mistake of thinking of these characters as a product of our modern world. In reality, they’re not.

That’s right. Superheroes, our beloved costume-wearing, crime-fighting champions of all that is good, are not entirely original. Instead, we find that many (not all) of the aspects of these super humans, including their physical traits, storylines, and vulnerabilities, reflect those of the heroes of Greek mythology and legend.

Now, the prospect of superheroes being the offspring of ancient tales either excites you (because you love history and think the connection is awesome) or crushes you (because, to you, superheroes are the best thing that modern humans have created, and now it turns out we can’t really claim the idea). Nonetheless, the good news is that, one, there aren’t many things in this world that aren’t a revisit to some past idea, and, two, some of the coolest things about superheroes are original ideas, like secret identities, scientific origin stories, and, yes, the catchphrases.

There are a few ways in which modern superheroes seem to emulate Greek myths and legends. First off, heroes from both eras share similar physical features. Most of the characters who dominate the superhero scene (i.e. Batman, Superman, Spiderman, and Wonder Woman) have big muscles—their chests, abs, biceps, and shoulders seem over-emphasized.

Likewise, in Greek legends, the hero is almost always depicted with a muscular build and athletic features (like in this statue, which scholars say portrays either Zeus or Poseidon or this portrayal of Hercules on an ancient vase). We all know that being a hero doesn’t require someone to look like a body builder, but it is clear that the Greeks—who created depictions of heroes in mythology and legends—saw it fit to give them that look, and we see the same emphasis on impressive physique in superheroes today.

You may be saying that it’s just a coincidence that both ancient and modern superheroes are totally ripped. And maybe a lot of that has to do with humans striving for perfection, the way we like to come up with a picture of “the perfect body.” But the next similarity on our list is much harder to label as just a fluke.

Bruce Wayne starts life as the son of rich parents who are tragically killed before his very eyes in a dark alley. Young Bruce feels as if he caused their deaths, since he is the reason they had to exit the building. When Bruce grows into a powerful billionaire businessman, he devotes his nights to suiting up as Batman and fighting crime throughout the city of Gotham. Thus, it is the tragic death of his parents and his own feelings of guilt which compel him to become “the caped crusader.” It’s a familiar origin story that makes for an interesting character.

But long before Bob Kane and Bill Finger came up with the idea of a bat-inspired hero fueled by a past tragedy, there was Hercules. This demigod was the son of Zeus, the most powerful of all the Greek gods. Zeus is married to Hera, but Hera is not Hercules’ mother. Hera despises Hercules, and puts him under a spell that causes him to mistakenly take the lives of his family. (Yes, the Disney version is watered down a bit.)

Understandably, our friend Hercules feels guilty as a result of the tragedy, and he decides to do twelve labors as a way to make things right. The labors include heroic feats like wrestling a lion, defeating the Hydra (a serpent with nine heads), and wrangling a raging bull. Like Batman, Hercules’ life of heroics was triggered by an early tragedy.

Is Kryptonite your Achilles’ heel?

The resemblances don’t end there.

Comparing two more legendary heroes reveals another similarity between our superheroes and the ancient Greeks’ champions. Think for a second about Superman. He’s a hero who has more super powers than he knows what to do with. I mean seriously, he can fly, he’s indestructible, has super strength, super speed, x-ray vision, laser vision, breath that blows like a tornado. All these powers make him a contender for the title of the most powerful superhero of them all.

But even with an impressive repertoire of abilities, Superman has a major weakness: kryptonite. It’s a fictional substance that, when it comes close to him, renders him essentially useless. Unfortunately, his enemies know this, and use it to try and get the best of him. The idea of kryptonite was a creative way to humanize a seemingly god-like character. And it caught on so well that it’s commonly used in regular conversation as a way to refer to one’s weakness.

However, just like Batman’s iconic origin story, the idea of a near-perfect hero having a detrimental weakness isn’t a new idea. As you’ve probably already figured out, the ancient demigod warrior Achilles had his own Kryptonite thousands of years before the Man of Steel. And while Kryptonite was popular enough to become a permanent metaphor, Achilles’ weakness inspired the name of the Achilles tendon.

Devoted comic book fans have known from the start that Marvel and DC’s latest superhero film installments are nothing new. Though they’ve dominated the box offices and given life to beloved characters, these films ultimately owe their success to the original writers who created them. As we’ve seen, however, we often forget that the origin of modern superheroes goes back much further.

This isn’t to point fingers and call the artists who created these heroes and their storylines copy cats—we know that each hero has been given unique characteristics. No, the value in recognizing this historic connection is in realizing the similarities we share with ancient civilizations. Just as they needed heroes, so do we.